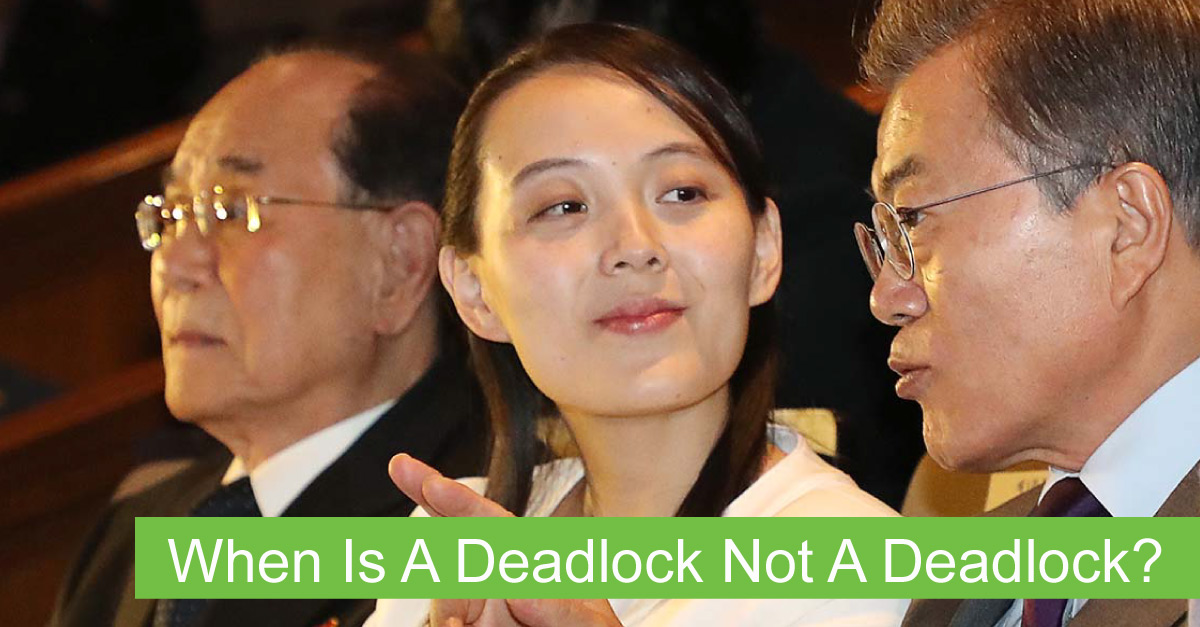 Changing Negotiators is a classic manoeuvre to get you out of a DEADLOCK. North Korean leader, Kim Jong-un, decided to send his only sister, Kim Yo-jong to the Opening Ceremony at the Winter Olympics making a Process manoeuvre proving that if we appreciate the importance of separating Process (the ‘How’) from Content (the ‘What’), there is no such thing as a DEADLOCK.

Without ever speaking in public, Ms. Kim managed to outflank President Trump’s envoy, Mike Pence, to the Winter Olympics in a negotiation game of diplomatic image-making.

Mr. Pence came with the old message — that the United States would continue to ratchet up ‘maximum sanctions’ until the North dismantled its nuclear arsenal (he focused on the CONTENT of the DEADLOCK). Ms. Kim’s tone was very different. She came with new messages of reconciliation, as well as an unexpected invitation for the South Korean president to visit Pyongyang, the North Korean capital (she focused on making a PROCESS move).

Ms. Kim delicately delivered a strong strategic message. However, it was not just the message that was conveyed collaboratively. It was also control of the ‘atmospherics’. How was this achieved?

The emotional MOOD was managed by ‘bringing in’ a new seemingly collaborative negotiator; the ‘little sister’, who delivered with cooperative nonverbals.

The PLACE was quite symbolic. The North Korean delegate was sitting just a few feet away from the US Vice President, right beside the UN Secretary General and just behind the President of South Korea,
Moon Jae-in.  Photograph flashes and colors were abounding and the spectacle began with a giant gong. It certainly appeared that all were a friendly group, with the exception of Mr. Pence who literally turned
his back to Ms. Kim the entire time!

TIMING also impacted on the action. By choosing the Winter Olympics’ Opening ceremony, one of the world’s most high-profile events, the North Korean dictator Kim Jong-un, effectively exploited the TIME to profile his sister.

If Kim Jong-un’s goal was to step back from a Deadlock and step up to appear more collaborative using a PROCESS manoeuvre, he was certainly successful.

Or, was he just trying to outshine US President Trump by having his ‘little sister’ surpass the US delegate and attract the more praise from the media? If the latter, he successfully managed to confront President Trump’s personal covert need to always win the spotlight!

When you find yourself stuck in a DEADLOCK, stop focusing on the substance or CONTENT of the deadlock and have a look at some PROCESS options. The goal is to give the sense that you are moving the Outcome and un-freeze the Other Party.

And of course, carefully consider how you can purposefully manage the Time, the Place, and the emotional Mood.

Without ever speaking in public, Ms. Kim managed to outflank President Trump’s envoy, Mike Pence, to the Winter Olympics in...
Susie Maloney
Phases

End A Negotiation Stand-Off With These Tips

When nations collide on issues that impact the world with potentially major consequences, we all sit up and watch. What is the nature of deadlocks?
Michael Hudson