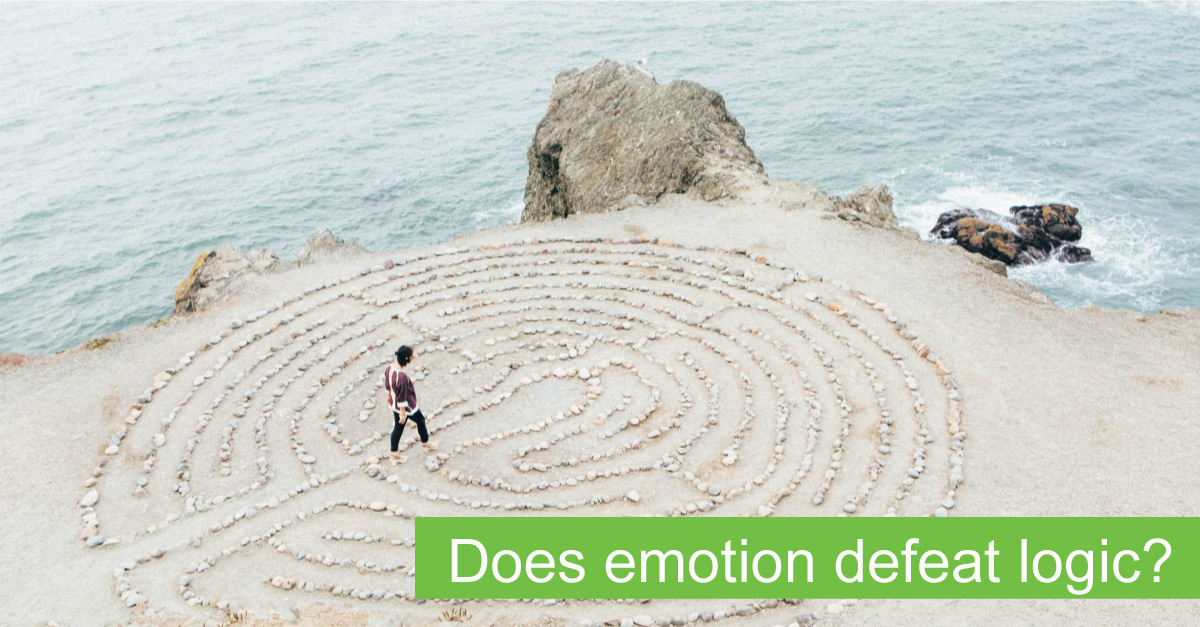 A surprising number of our decisions are based on emotion rather than logic. This may not necessarily be a bad thing, as it can lead to faster, more efficient decisions. However, it is something very important that we need to be aware of.

Fake news and alternative facts are dominating the headlines in the early months of the Trump presidency. It seems bout the reliability of the ‘alternative facts’ being used as the basis for decisions. Trump appears to appeal to his supporters’ emotions rather than purely relying on facts.

Just as most of us think we are above-average car drivers, we generally like to consider ourselves as people who are guided by reason. While this helps us feel in control of our environment, it often isn’t actually the case. An extensive body of psychological research emphasizes that our emotions can and do profoundly affect our decision-making, a process of which we are less aware. When we are conscious of this, we might call it a ‘gut feeling’ or something that ‘feels right’. A surprising number of our decisions are based on emotion  rather than logic. This may not necessarily be a bad thing, as it can lead to faster, more efficient decisions. However, it is something very important that we need to be aware of.

When negotiating, recognizing and catering for the emotional needs of the other party is critical to achieving a successful outcome

The advertising industry knows this well. Car advertisements on television focus on ideal lifestyles and glamorous partners rather than the vehicle’s technical specifications. Fast food is sold with images of laughing, healthy-looking children. Big-name brands achieve their renown more through their image management (ie. how the consumer ‘feels’ about the brand) than by necessarily providing a superior product.

Although some may conclude that on occasions Donald Trump appears to play the ‘fool’, he is an experienced business negotiator and a canny operator. He purposefully uses certain psychological tactics to convey a range of emotion-based messages to the public. He attempts to control the emotional ‘process’ rather than focusing on the ‘content’. For instance, Trump’s Mexican wall won’t be a wall, it’ll be a
fence, yet the word ‘wall’ has a reassuring, solid feel that pushes the right emotional buttons among his supporters. ‘A big, beautiful wall’ he said in one tweet despite critics pointing out it is more likely to be a fence and an ugly see him as an anti-establishment figure, an outcome he would have been unlikely to achieve by concentrating on the facts: the ‘content’.

In the UK, Michael Gove a leading Brexit campaigner, in the lead-up to the vote was asked if he could name any economist who backed Brexit.  He brushed off the question, instead answering ‘the people in this country have had enough of experts’. He was proved correct. A voter who has had enough of experts espousing content they no longer wish to hear is a voter who is tired of what they might regard as ‘professional’ opinions and facts. These voters, in fact, were desperate to hear alternate content that appealed to their deeply embedded emotions: their fears of immigration, their anxieties about globalisation, for example. Their psychological (emotional) needs (ie. the process) had a bigger impact on their decision-making than the factual pros and cons of leaving the European Union (the content).

In the USA, Donald Trump and his team learned plenty from this. The democratic process is essentially millions of negotiations between politicians and individual voters. The Trump team understood in these negotiations they could be successful through appealing to those voters’ with obvious and deeply held prejudices, emotions and fears rather than focusing on the facts.

As crucial as process is to achieving a successful negotiation outcome, ultimately it is its skillful intermarriage with content that will deliver the best results. Trump’s appeal to his supporters’ emotional needs may override factual content for now, but ultimately  – one assumes – he will need to deliver on his promises.

The purpose of negotiation is needs-satisfaction and emotional needs  are a vital part of the negotiation process. Noting the Trump lesson that emotion can defeat content, a successful negotiator carefully considers the impact of the other party’s (generally unstated) emotional needs on their decision-making as well as their more fact-based stated needs.

So, rather than a fixed course of action, skilled negotiators prepare a flexible negotiation strategy: one that focuses on both the process (including emotions) and the content is the ideal.