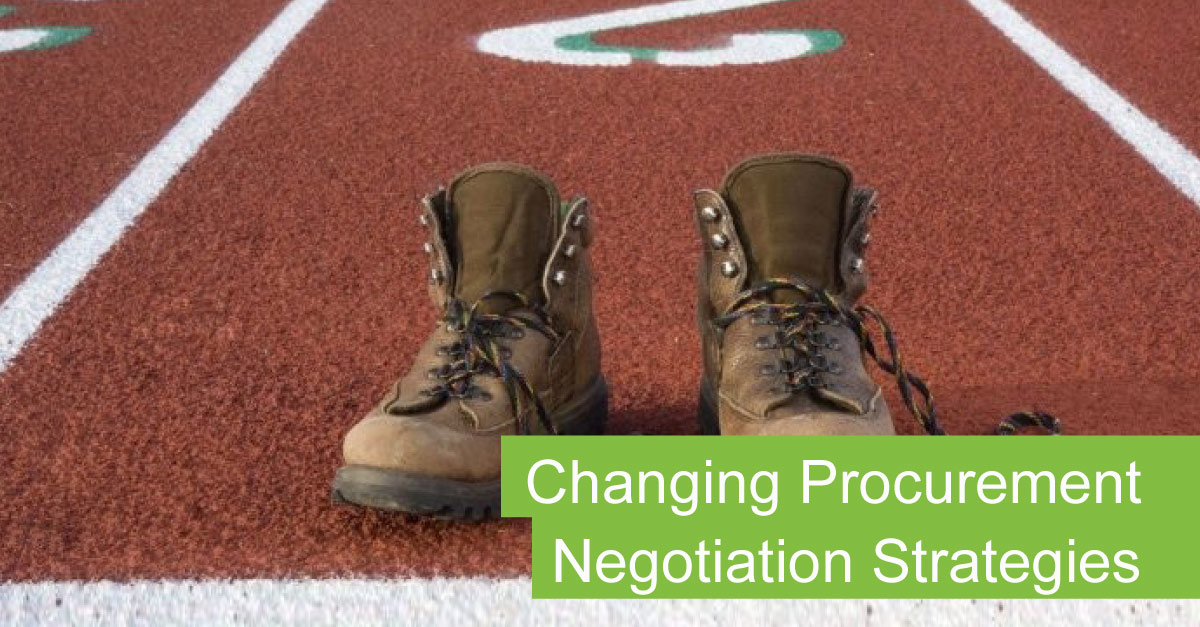 Procurement negotiation strategies need to change over the next year if purchasers are to continue to add value to their organisation’s bottom line.

Perhaps purchasers have it pretty easy during a recession – the perception tends to be that buyers have more power than sellers and they use it. Suppliers get beaten with a club to achieve cost savings.

But no matter how big the competitive (“red” in ENS International terminology) club is that purchasers use, eventually either:

If we are going to come out of the recession, purchasers need to change their procurement negotiation strategies before the buyers sense the potential shift in balance in their favour.

Either way purchasers will benefit most if they start adopting more co-operative (“blue” in ENS International terminology) negotiation strategies. Savings and efficiencies will now be achieved by working with suppliers towards joint goals and joint gain. This is a very different skills set. To change negotiation strategies not only requires different negotiation skills, but also requires subtle influencing. This means changing the mind-set of the sales person, changing the relationship, anchoring different approaches and shifting from short-term to long-term.

A client of ours spends a large budget on uniforms. Over the last four years the cost per uniform has dropped significantly and the appropriate commodity purchaser has been praised. Someone has noticed that the uniforms don’t seem to last nearly as long and so did some investigating and found that the cost per wear has increased significantly. The commodity purchaser for uniforms was informed and he challenged the uniforms supplier. The uniforms supplier did their own investigation and reported back that it was not their fault, but the poor handling and inappropriate cleaning by the laundry supplier. Laundry comes under services purchasing and so the services purchaser for laundry challenged the laundry services supplier. The laundry supplier did their own investigations and reported back that they were not to blame it was the poor quality of the material and workmanship of the uniforms’ manufacture.

So now we had a situation where not only were the purchasers threatening each supplier, but there was internal friction between one of the commodity purchasers and one of the services purchasers.

ENS International were already engaged in this company, so got involved in this negotiation as a side issue. We advised a more collaborative approach to really understand what both suppliers were saying, and what each would want to make the uniforms’ supply and use more effective. These conversations were to get ideas about potential solutions but more importantly to change the relationship from one of blame and threats to inclusion, working together and jointly agreeing a mutually beneficial solution. With this new relationship they were willing to attend a joint meeting of the uniform supplier and purchaser and the laundry service supplier and purchaser.

The agreement was an improved specification for the uniforms and slight modifications to the process used by the laundry.

How Effective Leaders Negotiate and Influence Positive Outcomes in a Crisis

Leadership is no longer about dominance and positional power, but about the ability to provide clear direction and purpose, as well as...
Michael Hudson
Style

Negotiators: How Well Do You Listen?

A number of articles and books have examined Henry Kissinger (one-time USA National Security Advisor and Secretary of State) and commented on his...
Michael Hudson
Style

Procurement negotiation strategies need to change over the next year if purchasers are to continue to add value to their organisation’s bottom line.
Gary Oakley
Tactics

When dealing with negotiators who are driven by personal needs you sometimes need to strengthen your acceptance with reservations and conditions.
Michael Hudson
Style

The Principles Of Effective Persuasion

Skilled negotiators and influencers have long recognized the power created by linking views with those who hold authority...
Michael Hudson
Tactics

Leadership is the process of effective influencing

Influencing is everywhere. Yet many of us are oblivious. To skilled influencers it is second nature, like breathing. They deeply understand...
Michael Hudson
Phases

The Importance Of Naming The Event

‘We’re in discussions…’ announced one side. ‘We’re in ongoing negotiations’ states the other. This interesting variation in their choice of words is..
Michael Hudson