As ENSI negotiation Process Observers we can anxiously consider how Trump’s aggressive approach plays out. Will the US’s tough talk escalate confrontation or deter North Korea? Is the loud noise around this new policy direction calculated? What may be the consequences?

In recent years, North Korea’s leader, Kim Jong-un, has authorised five nuclear tests, two in just the last year. Despite international trade sanctions and condemnation, North Korea has continued to pursue its missile-testing program ostensibly aimed at developing long-range nuclear warheads. Within this menacing geopolitical context Trump has emerged as a new player. His objective is clearly to see the Korean Peninsula demilitarised. Keen to demonstrate a new approach to North Korea we can analyse what-negotiating counter tactics Trump is employing to enhance his position and to alter regional perceptions of power.

Tips for Altering Perceptions of Power

Following this escalation of threats, aggressive military positioning and political alliance formation, we as negotiation Process Observers will sit tight watching how this crisis unfolds.

Is common ground now out of reach? We hope not. The solution, according to Massachusetts’s Democrat senator Ed Markey, is for the US to work with China to establish direct talks with North Korean leader Kim Jong-un. Mindful of the potential escalation of this conflict, and devastating consequences, direct talks focused on a negotiated outcome maybe the only way forward. 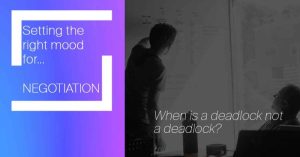